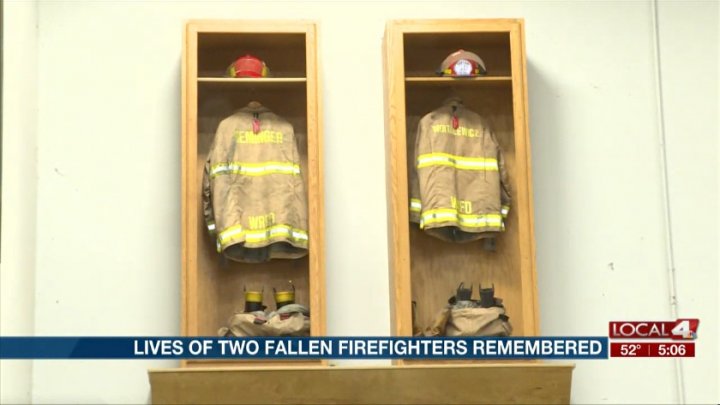 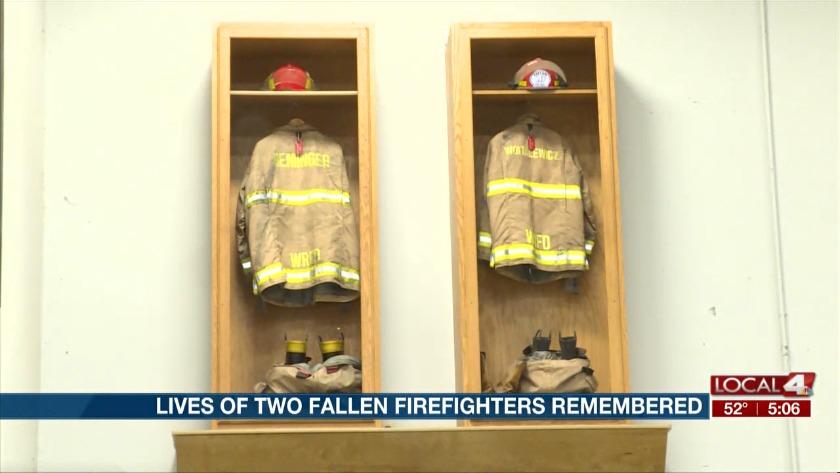 WOOD RIVER, Neb. (KSNB) - This Valentine's Day weekend marks the 16th anniversary of the death of two Wood River volunteer firefighters who lost their lives while trying to save someone during a house fire.

This Valentine's Day weekend marks the 16th anniversary of the death of two Wood River volunteer firefighters who lost their lives while trying to save someone during a house fire. (Source: Kelsey Dickeson, KSNB)

Eva Heminger remembers the call that left her late husband's gear hanging in a memorial locker at the Wood River Fire Department.

"At first Bob wasn't going to go, because our kids had basketball that day and he didn't want to miss it," Heminger said.

A woman was smoking on her couch, and dropped the cigarette on the couch. It caught on fire, trapping her inside.

Captains Bob Heminger and Kenny Woitalewicz went inside the house to rescue her. There was a breakaway connecting the garage to the house. The roof was loaded with ice and snow. It collapsed onto both men, knocking off their oxygen masks.

Eva Heminger said she heard the news over the scanner.

"I actually heard them call for the chaplain, because there were two firefighters down. I just had a gut feeling. I knew it was Bob and Kenny, because they always went in together," Heminger said.

She said it took awhile to get the roof off the men. More equipment had to be brought in from the city.

Bob Heminger had a broken hip and minor burns. He suffered from major smoke inhalation.

"He always said he would never go old. And I wish he could've," Eva Heminger said.

Bob Heminger left behind a wife and two kids.

Lindsay Krzycki, Heminger's daughter, was 11 when he died.

"Every 11-year-old girl needs her dad. He was kind of my go-to to figure everything out. My safety net," Krzycki said. "I kind of had to grow up pretty quick."

When the firefighters died, there wasn't anyone from the state trained to help the families or the department: Their deaths sparked change.

But Krzycki said she wished her family had more continuous support the years following her father's death.

"If this does ever happen in the future, I want the departments to realize they need to back up the families year after year. Not stopping after five or ten years. It's a whole life long situation that we all have to deal with. It gets easier as time goes on, but we all need to be there for each other," Krzycki said.

Valentine's Day was never the same for the Hemingers: Until two years ago.

Krzycki's middle son, Brixten, was born on the 14th anniversary of her father's death, making the day a celebration of life.

"I kind of figure you know, this is dad's way of saying this is okay. Everything's fine. Have something good to remember on this day," Krzycki said.

Eva Heminger described her late husband as ornery, but a loving father and husband always willing to help someone in need.

Heminger now have six grandkids. She said their family is Bob's legacy.

"I just want him to be remembered. Not necessarily as a firefighter, but as a great man. I mean he would do anything for anybody, and give you the shirt off his back. I just don't want him to be forgotten," Heminger said.

Lots of snow in the Rockies, more water for Lake Mac