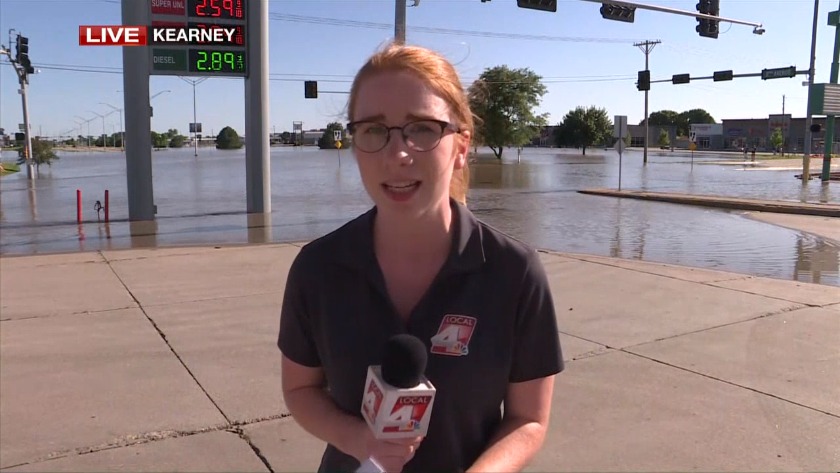 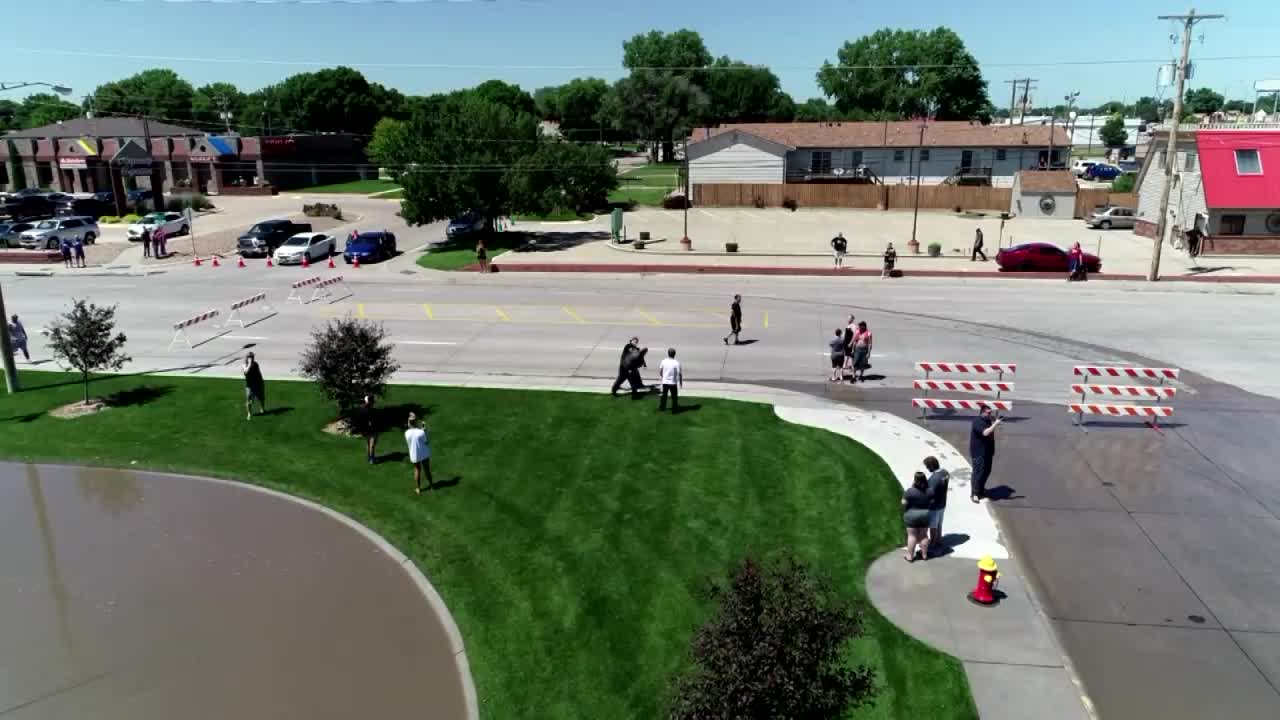 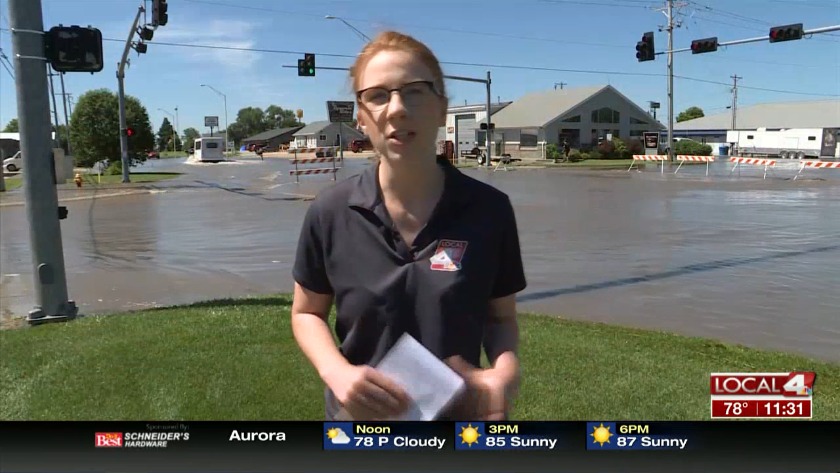 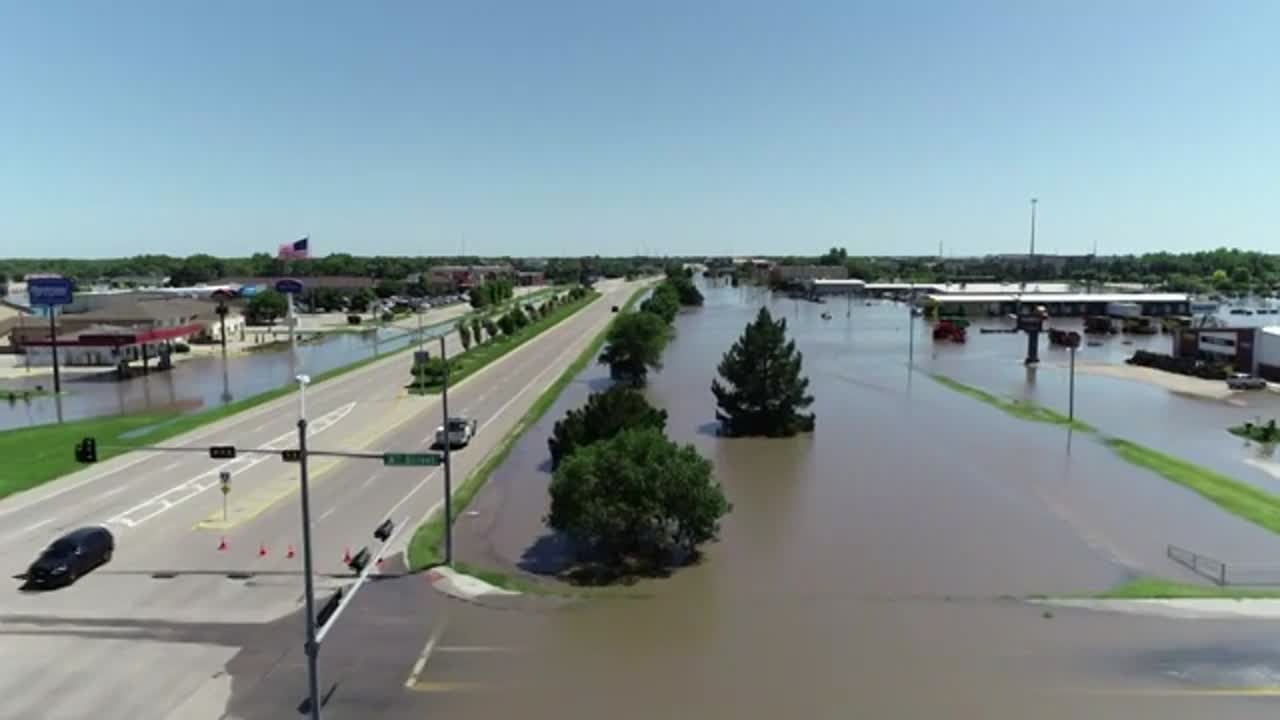 Drone video of flooding in Kearney 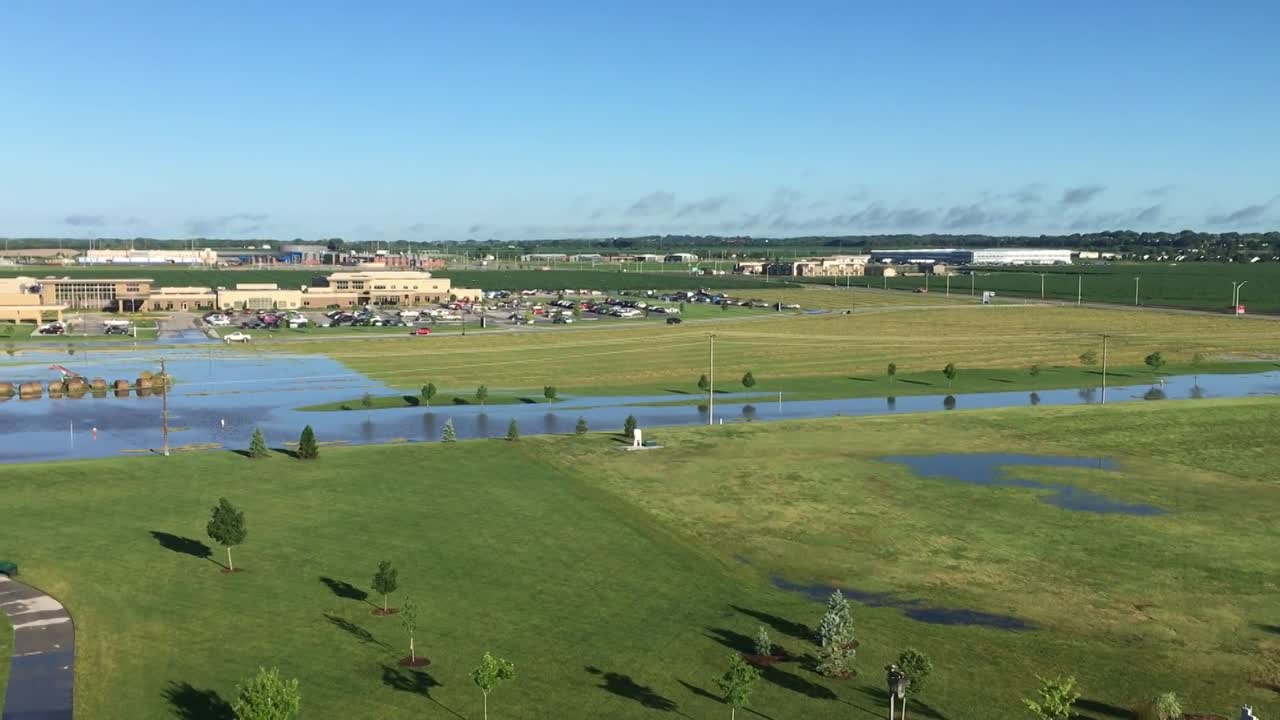 Evacuations are underway from all hotels at Talmadge and 2nd. (Source: Kearney Police)

He was scheduled to tour the affected areas early Wednesday morning. He's then scheduled to meet with local reporters at 9:00AM. You can see the press conference on ksnblocal4.com and our KSNB news app, as well as our KSNB Facebook page.

Hotels at Talmadge and 2nd in Kearney were evacuated due to flooding on Tuesday.

People were loaded up on buses, air boats and front loaders to bring them to the Salvation Army near down town. From there, many either took a taxi to try and get to Lincoln to catch a flight, or were taken to UNK where a dorm was opened up to take evacuees.

The state roads department closed the exit leading into 2nd avenue in Kearney due to rising flood water. From Monday night into Tuesday morning, Kearney received more than 4 inches of rain. A KSNB Local4 reporter reports there is water covering part of Interstate 80 between Kearney and Odessa.

The city of Kearney closed Yanney Park and the Peterson Activity Center on the southwest end of town.

The Nebraska Game and Parks Commission’s Kearney service center is closed. The office, located at 1617 1st Ave., is closed to the public to allow for cleanup. The public is encouraged to purchase permits online at OutdoorNebraska.org or visit a local permit agent.

The Buffalo County Emergency Manager said from north of Kearney to the central part of town, streets are completely flooded from sidewalk to sidewalk.

Emergency Management also said homes in Kearney are reporting flooded basements and some homes are being evacuated.

One woman had to leave her newly remodeled mobile home and watch as waters continued to rise.

Buffalo County Emergency Manager Darren Lewis said that much of the street flooding in Kearney was starting to recede, saying once the rain stopped, storm drains were able to start catching up up the high demand. At one point Lewis reported observing up to four feet of water in some Kearney streets.

Lewis said most streets in Elm Creek were seeing water running on them and that people in Elm Creek had been sandbagging overnight. He also reported flooding in the Ravenna area.

According to a tweet from Kearney Police Chief Bryan Waugh, KPD Officers assisted with at least 25 stranded motorists overnight. Waugh saying 15 vehicles which were either abandoned or stalled on flooded streets were towed.

All law enforcement agencies continue to encourage people to avoid flooded areas for their own safety and to allow first responders to perform their duties.

As of Tuesday morning, Highway 30 is closed in both directions due to flooding from Kearney to Elm Creek. If you need to be out on the roads in impacted areas, check 511 Nebraska first.

The Dawson County Sheriff's Office shared several photos of a flooded Highway 30 in Lexington. There are reports of cars stalled in water and authorities are reminding drivers to never go on flooded streets.

Officers and Troopers from @NSP_TroopC are now checking surrounding businesses surrounded by flood waters. If you have an emergency and are in need of rescue call 911 @BuffaloCoNE911. #kearneyflood2019 pic.twitter.com/i3yASu2scC

Evacuations are underway from all hotels at Talmadge and 2nd. We have bus transportation to Kearney Salvation Army. #kearneyflood2019 @CityofKearney pic.twitter.com/eMqmAWz8HI