National Signing Day | Here's who's signed to play with the Huskers 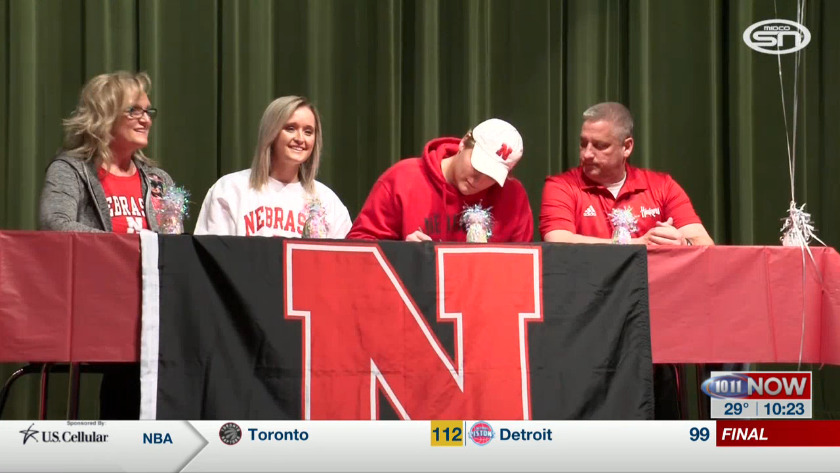 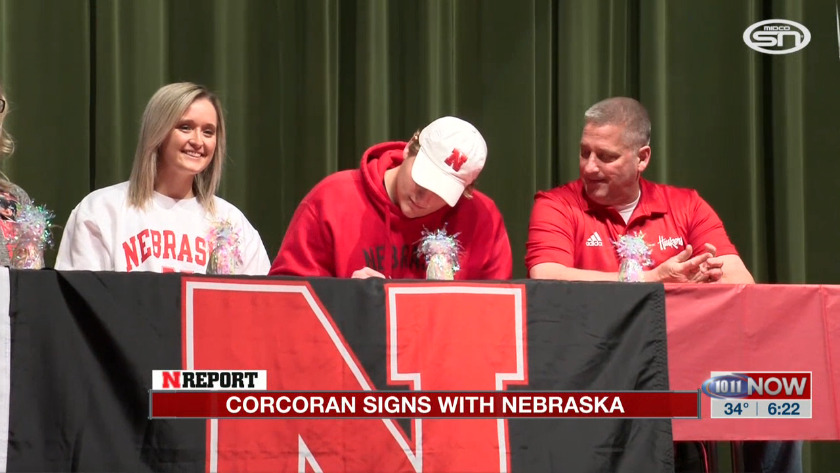 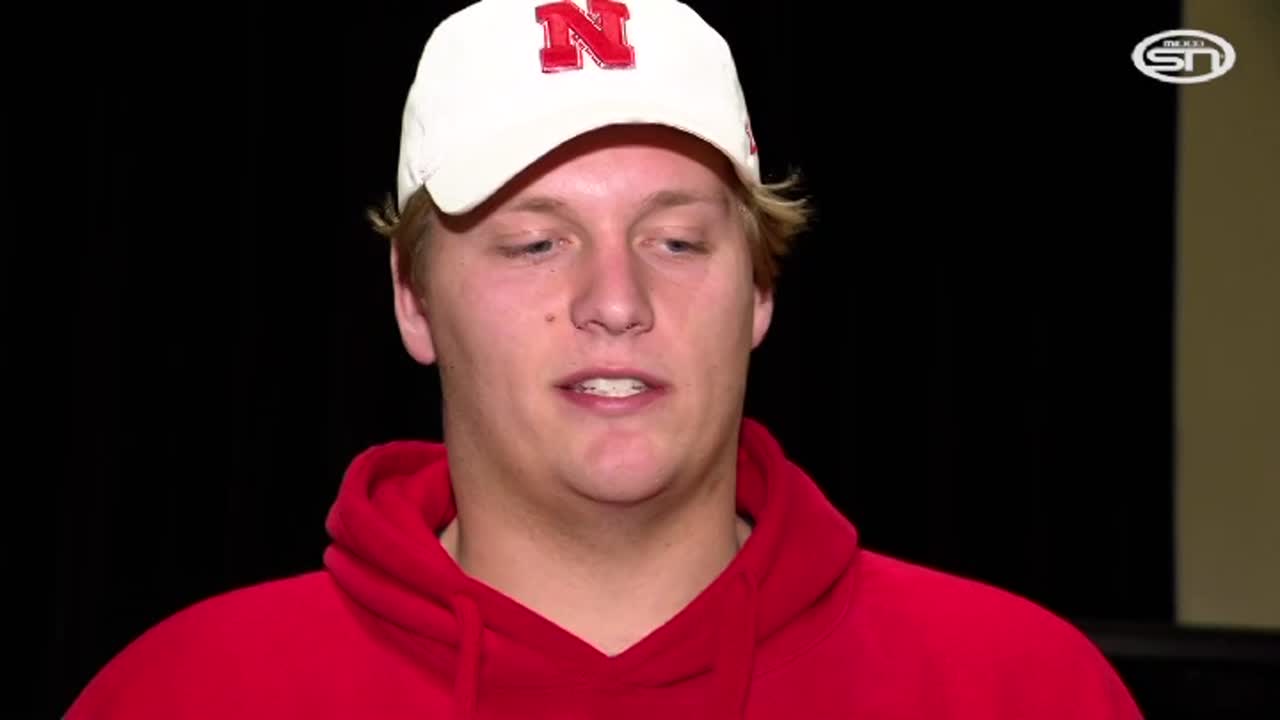 Turner Corcoran on why he chose the Huskers. 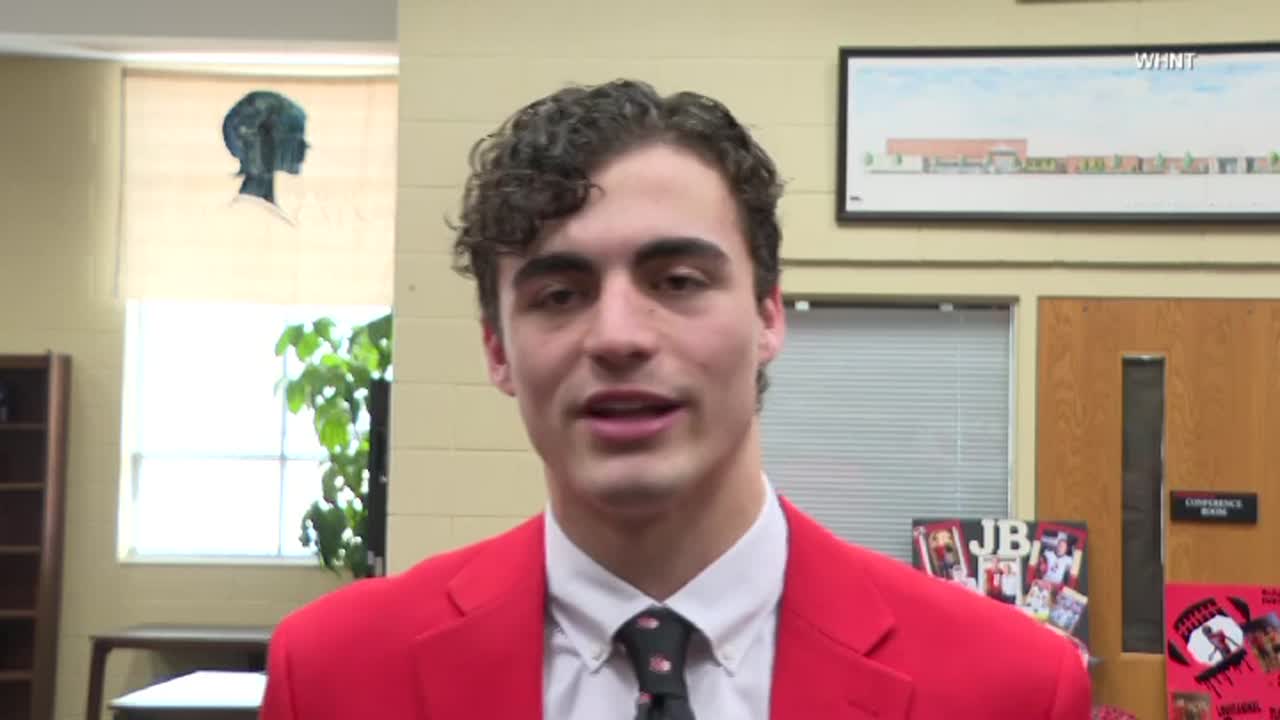 Logan Smothers on why he signed with the Huskers 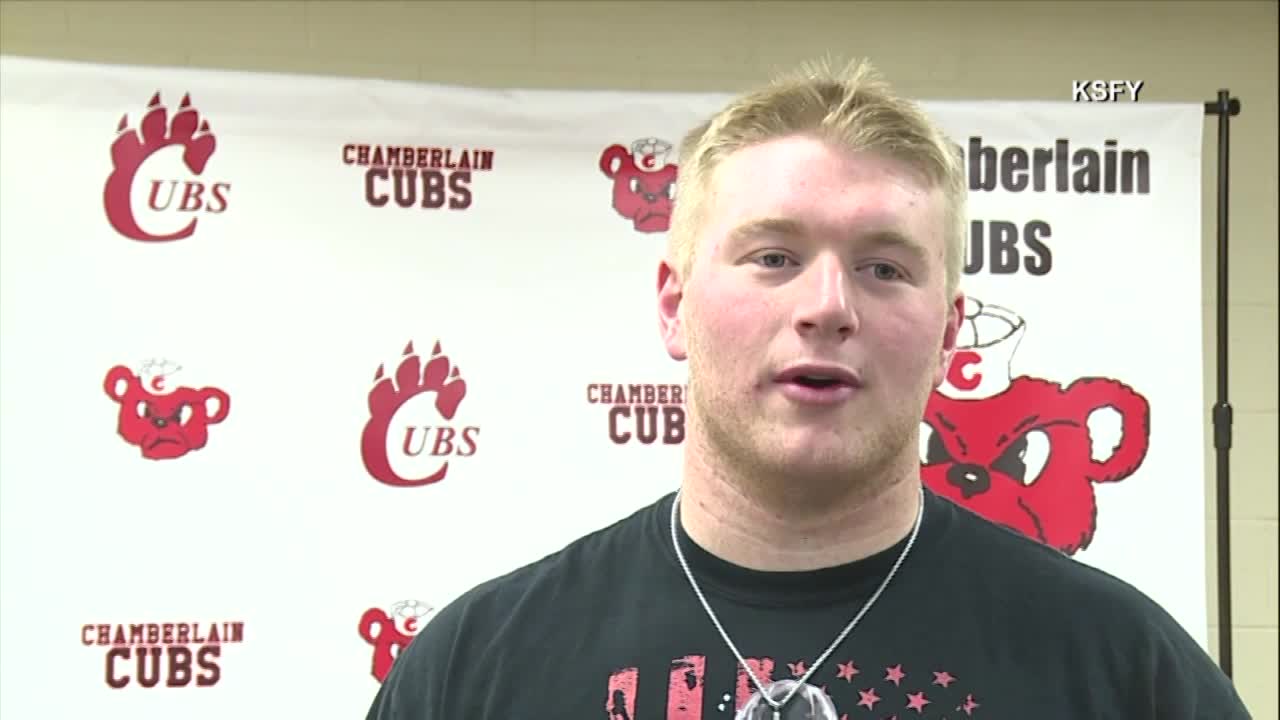 Nash Hutmacher on why he signed with the Huskers 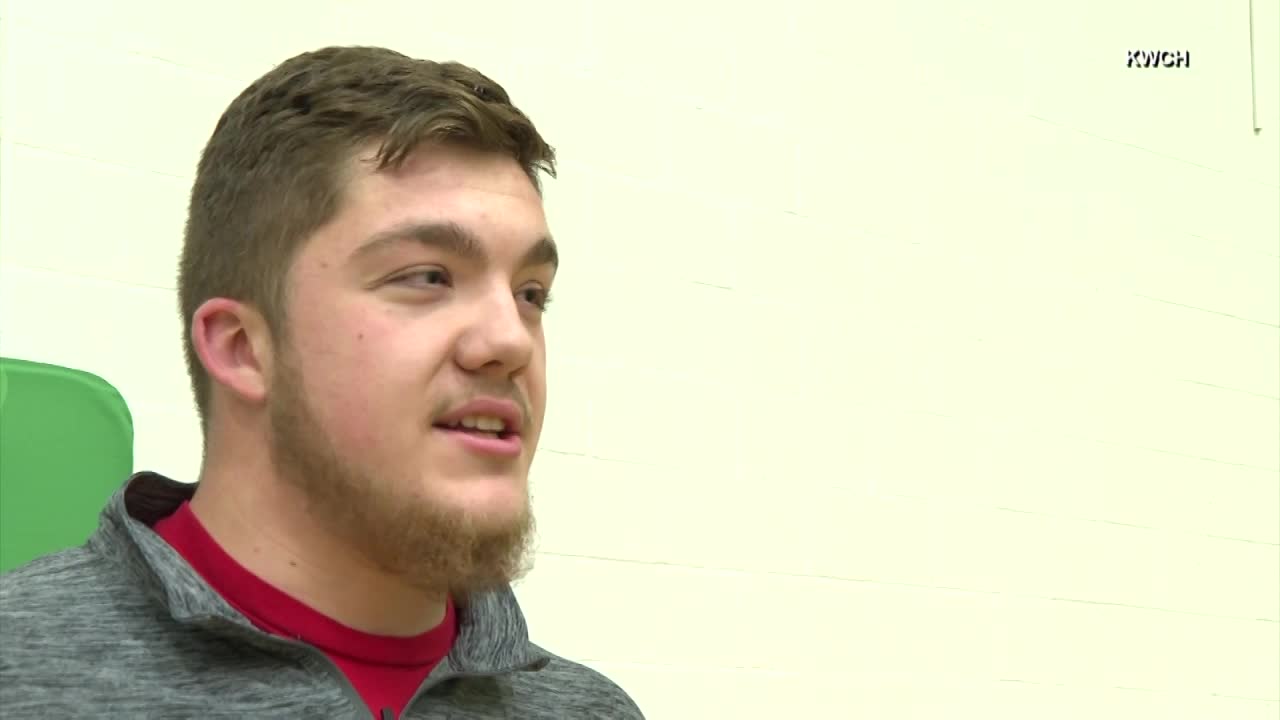 Alex Conn on why he signed with the Huskers

Coach Scott Frost said he's excited about the athletes that committed to play for the Huskers on National Signing Day.

"I think the thing that excited me the most was flying around the country for the last two weeks. Getting in homes with these guys and seeing what type of kids they are, what kind of personalities they have. Best thing about them is they love football, they love the game. They’re excited. They want to be at Nebraska. I would walk out of almost every house and say we’ve got the chance to win a lot of games with kids like this coming to the program.”

Here is the list of players who signed with the Huskers.

Listed among the top in-state players, Zavier Betts is a 4-star wide receiver who's been on Nebraska's recruiting radar over the past few years. Betts had 17 touchdown receptions in 2019 while leading Bellevue West to a state championship. Betts' status in the recruiting class was temporarily in question due to academics. However, he signed on Thursday, December 19th.

Alante Brown is coming to Lincoln after making his announcement on live television on Wednesday morning. The #1 prep school player in the country according to 247Sports chose the Huskers over Indiana and Maryland. Brown is another player that brings talent to the Nebraska wide receiver room.

If you wanted Signing Day drama, you got it with Francois. The four-star defensive back chose the Huskers over Miami in the gym of his high school. After taking his name off the table, Francois came back to announce he's coming to Lincoln. The signing of Francois shows this coaching staff is making Florida a priority. Travis Fisher continues his streak of signing talented players to the defensive backs room.

Another four-star from Florida, another big get for the Big Red. Nebraska continues to have success in Florida on this National Signing Day with the latest commitment coming from wide receiver Marcus Fleming. Fleming chooses to come to Lincoln with offers from Georgia and Florida State, among many others.

What a steal for Nebraska as the Huskers land Morrison out of Oklahoma. Morrison put up monster numbers in high school and will look for playing time immediately with the Big Red. It's another feather in the cap of Ryan Held on his recruiting ability to identify talent and get it to Lincoln. Morrison also had offers from Arkansas, Minnesota, and Wisconsin.

A four-star prospect that makes plays with his feet and arm. He's been committed to Nebraska for some time and has officially signed with the Big Red. Smothers had offers from Ole Miss and Louisville among others. He joins a quarterback room that continues to get more talented with Adrian Martinez, Noah Vedral, and Luke McCaffrey.

Greene was under the radar for Nebraska fans but is quickly being well-known in this class. A four-star linebacker from Florida was committed to Florida State but flipped to Nebraska after FSU made a coaching change. Greene chooses the Big Red over offers from Florida State, Florida, and Miami. This staff has hit Florida hard on the recruiting trail and getting Greene to come north is huge. The Huskers are working on stocking the linebacker room, a position that struggled in 2019.

What a get for Nebraska. This was one the Huskers top targets and they landed the big-bodied wide receiver. Nebraska needed a play-maker on the edge and it will get it with Manning. Rated as the #1 juco wide receiver, if he gets to Lincoln, he will more than likely play immediately. Running backs coach Ryan Held said on the Husker Sports Network that Manning is 'special'.

Turner Corcoran is joining the Huskers pipeline as an offensive threat. He holds Nebraska's highest star rating on 247Sports. Corcoran is in the 2020 class and is optimistic in where this program is going.

Travis Fisher shows that he can not only develop, but recruit. Fisher and the staff have made Florida a priority and that shows with Gray. Gray is listed as a four-star prospect by 247Sports and chose Nebraska over Miami, Alabama, and Auburn among many other powerhouse programs.

The term "diamond in the rough" may be overused when it comes to recruiting, but Mauga-Clements fits just that. Watch his tape and you'll see why Nebraska is bringing him in at a position of need. The offer list may not be overwhelming but his film is solid. He's a late-bloomer and adds depth to the Blackshirts.

Nebraska needs to replace several key players on its defensive line so bringing in Jordon Riley helps. Listed at well over 300 pounds, Riley will bring size to the defensive line. The Huskers have hit the junior colleges hard, especially on the defensive side. Riley comes to Lincoln after playing at Garden City CC. Before that, he was at North Carolina.

Nebraska wants to bring speed to Lincoln and it is doing that with the signing of Nixon. He's listed as an all-purpose back as Nebraska will look to play him in the 'Duck-R' role more than likely. Nixon is listed at 5-11, 185 lbs. and will bring another fast presence to the wide receiver room. He chooses Nebraska over offers from Notre Dame and Baylor.

Jimari Butler joins the Blackshirts out of Mobile, AL. He's a 3 star athlete on Rivals and 247Sports. He passed on TCU, Tennessee, Illinois and Kansas, and was previously committed to Tennessee.

Nebraska gains another JUCO product with Niko Cooper. The OLB played in 11 games with 24 tackles, 2.5 sacks and 2 forced fumbles. He's a 3 star athlete on Rivals and 247Sports.

Blaise Gunnerson is joining the Huskers from Carroll, IA. He's a 3 star athlete on 247Sports and Rivals. He chooses Nebraska over Iowa, Iowa State, Minnesota and Kansas State. Gunnerson is a prime target for Coach Frost and his staff as they like to recruit within a 500 mile radius of Lincoln.

Just look at the offer list for Scott and you know the Huskers are getting a highly-coveted running back. Alabama, Miami, and Michigan among many others have offered by Scott will be a Husker. Scott may be on the shorter side but he brings power and speed. Nebraska running backs coach Ryan Held continues to do a great job on the recruiting trail as the running backs room in Lincoln gets better by the day.

Nash Hutmacher is adding to the defensive line for the class of 2020. He's a 6'5" 285 lbs rural South Dakota kid. He also held offers from Wisconsin, Oregon, Iowa State and Missouri. He's known as the "Polar Bear" and is a state champ on the wrestling mat.

Nebraska coaches want to bring speed to Lincoln, but they also want size and power. Black is listed at 6-4 and will help a defensive line room that is graduating the likes of Darrion Daniels and the Davis twins. Black chooses Nebraska over Arizona and Georgian Tech.

Listed at 6'2'', Lynum brings size at the defensive back position. He's been committed to Nebraska for sometime and made it official on Wednesday. Lynum chooses the Huskers over offers from East Carolina and Kansas.

From Northwestern High School, Delancy's tape is a good one. The hard-hitting defensive back is one of many Florida players in this class. Delancy chooses Nebraska over Louisville.

'Conn' you feel it?!? Alex Conn is a 6-foot, 6-inch offensive lineman that is rated three stars by most recruiting services. Conn led his high school to back-to-back state championships. In fact, he ended his high school career on a 26-game winning streak. Conn held scholarship offers from over half of the schools in the Big 12.